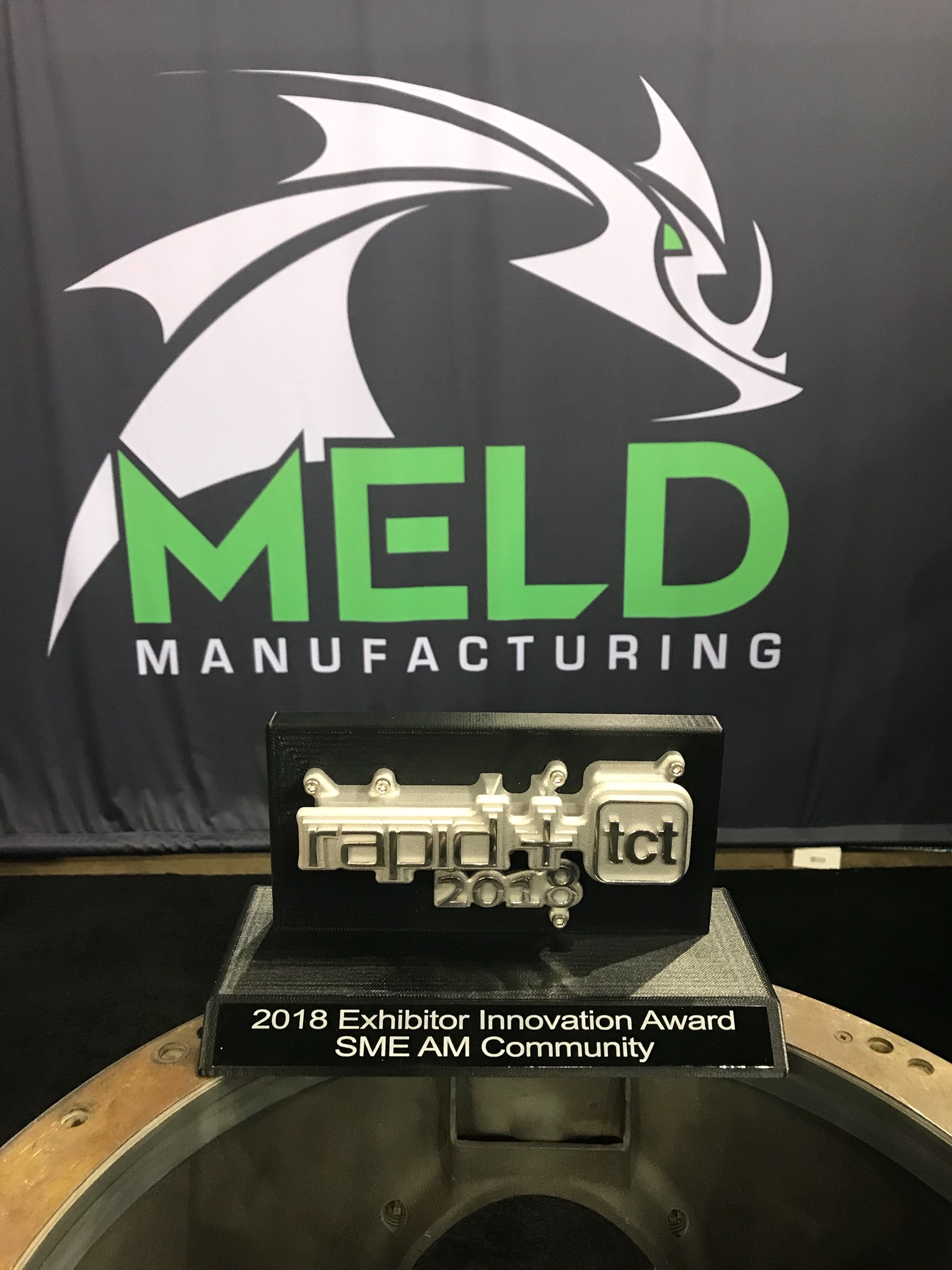 On Thursday, April 26, 2018, MELD Manufacturing Corporation was selected from the more than 300 exhibitors at RAPID + TCT 2018 as the recipient of the Innovation Award. RAPID + TCT, a 3D printing and additive manufacturing event that draws industry leaders from around the globe, is North America’s preeminent event for 3D manufacturing. This year’s show, hosted in Fort Worth, Texas, saw live demonstrations and speakers representing a variety of recognizable institutions, from FIAT/Chrysler and Caterpillar to Lockheed Martin and the United States Army Research Laboratory. The Innovation Award recognizes the most groundbreaking new product or service with industry-changing potential.

MELD Manufacturing Corporation, which was launched earlier this month as a subsidiary of Aeroprobe Corporation, was selected for the award for their patented MELD technology. MELD is a unique process for additive manufacturing that avoids melting the metal, thereby eliminating the weaknesses and other issues associated with melt-based processes. MELD’s open-atmosphere operation and scalable equipment also make it more efficient and capable of making larger parts than similar processes. In addition to additive manufacturing, MELD can be used to repair, coat, and join a wide range of materials, including some metals that cannot be welded with traditional processes.

“The MELD technology is a revolution,” noted MELD Manufacturing Corporation CEO Nanci Hardwick. “To be recognized at RAPID by these industry leaders demonstrates just how much potential MELD has to change the way we think about manufacturing. We want to see MELD adopted across industries, so it’s exciting to see genuine interest from such a diverse crowd.”

The winner of the Innovation Award is selected by a panel of industry experts. This year’s group included judges from industry, government, and academia.

“To earn this award our first year at RAPID is an honor,” said MELD Additive Manufacturing Manager Chase Cox. “MELD is on its way to innovating a number of industries and this award is a great milestone.”

After finishing up at RAPID + TCT, MELD will launch into a busy conference season, including participation in AeroMat in Florida and MegaRust in California in May alone.  For customers anxious to learn more about the MELD technology, the company is currently offering machines sales, contract manufacturing, and a variety of other services.