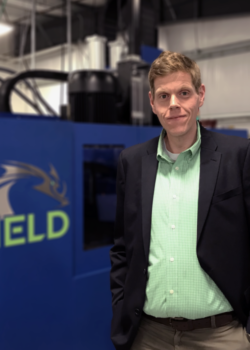 Dr. Chase Cox has been promoted to Director of Technology for MELD Manufacturing Corporation.

Cox previously served as Additive Manufacturing (AM) Manager and joined the company in 2017 when it was still a division of Aeroprobe Corporation. Throughout 2018, he was a vital team member as both the technology and company won international attention.

MELD™ is an award-winning process for metal that does not melt the material, thereby avoiding the many issues that plague melt-based processes. MELD machines are also fully scalable, allowing them to produce much larger parts than other technologies. During his time with the company, Cox has helped clients implement the process for applications in a broad range of industries, including aerospace and defense, and has been instrumental in overseeing AM projects for customers worldwide. Cox’s new role as Director of Technology will see him managing projects in areas beyond AM, including repairing, coating, and joining, using the patented MELD technology.

Cox previously held a position at Schlumberger and has a history of developing client-specific solutions. He brings more than a decade of experience in solid-state processes to the role and holds a PhD in Mechanical Engineering from Vanderbilt University.